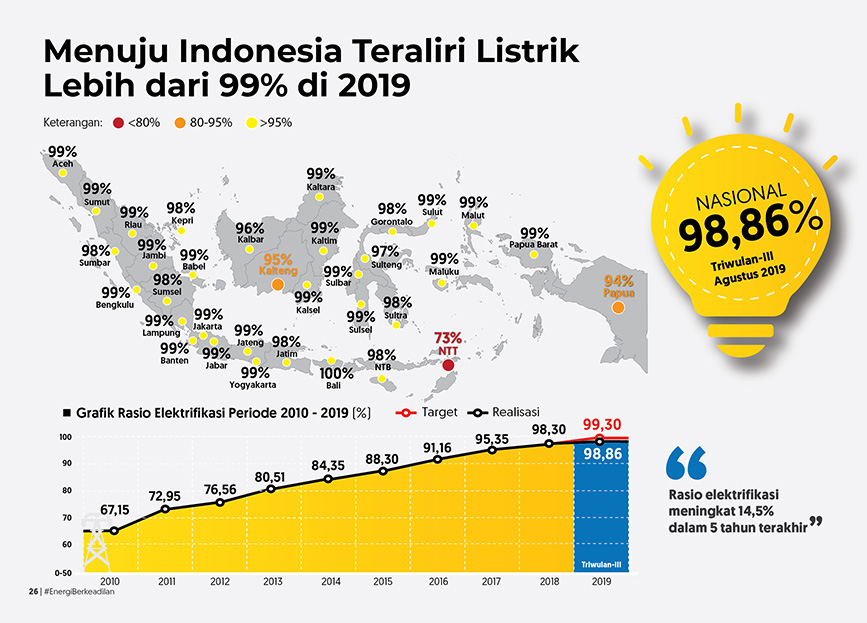 Growing by 3% per Year, Electrification Ratio in 3rd Quarter Reaches 98.86%

Growing by 3% per Year, Electrification Ratio in 3rd Quarter Reaches 98.86%

Equal access to electricity is one of the government's duties in order to realize social justice for all Indonesian people. The Ministry of Energy and Mineral Resources (EMR) has gradually improved reliability of electricity grid through a variety of programs and has made numerous efforts to provide electricity to the 3T (frontier, outermost, and least developed) regions by using local energy potential.

"In the last 4 years, the national electrification ratio has reached a 3% average per year from the previously just 1%," added Director of Electricity Program of DG Electricity, Jisman P. Hutajulu, some time ago in Jakarta.

"During the last 4 years, development has reached an average of more than 3%. In the past, (if we developed by) 1% we would have been very grateful. What we must focus on now is there are still two provinces which electrification ratio is below that of the national ratio, namely Nusa Tenggara Timur (74%) and Papua (94%),"said Jisman.

The government will continue to promote increased electrification ratio at these two least developed provinces in order to match the ratio achieved by the other provinces in Indonesia which have reached an average of 99%.

To realize the electrification target by the end of 2019, there are still about 1,103,859 households which have not enjoyed electric power and must be electrified. Out of the 1.1 million households, based on the Integrated Database of Statistics Indonesia (BPS) and the verification results of PT PLN (Persero), 710,008 households are impoverished, meaning that electric networks are built in front of the houses but these people cannot afford to pay new electric connections because they are economically incapable.

The BPBL program has started to show results. The poor have now had power connection, and the slightly expanding national electrification ratio is estimated to reach 99% by the end of 2019. (IY)