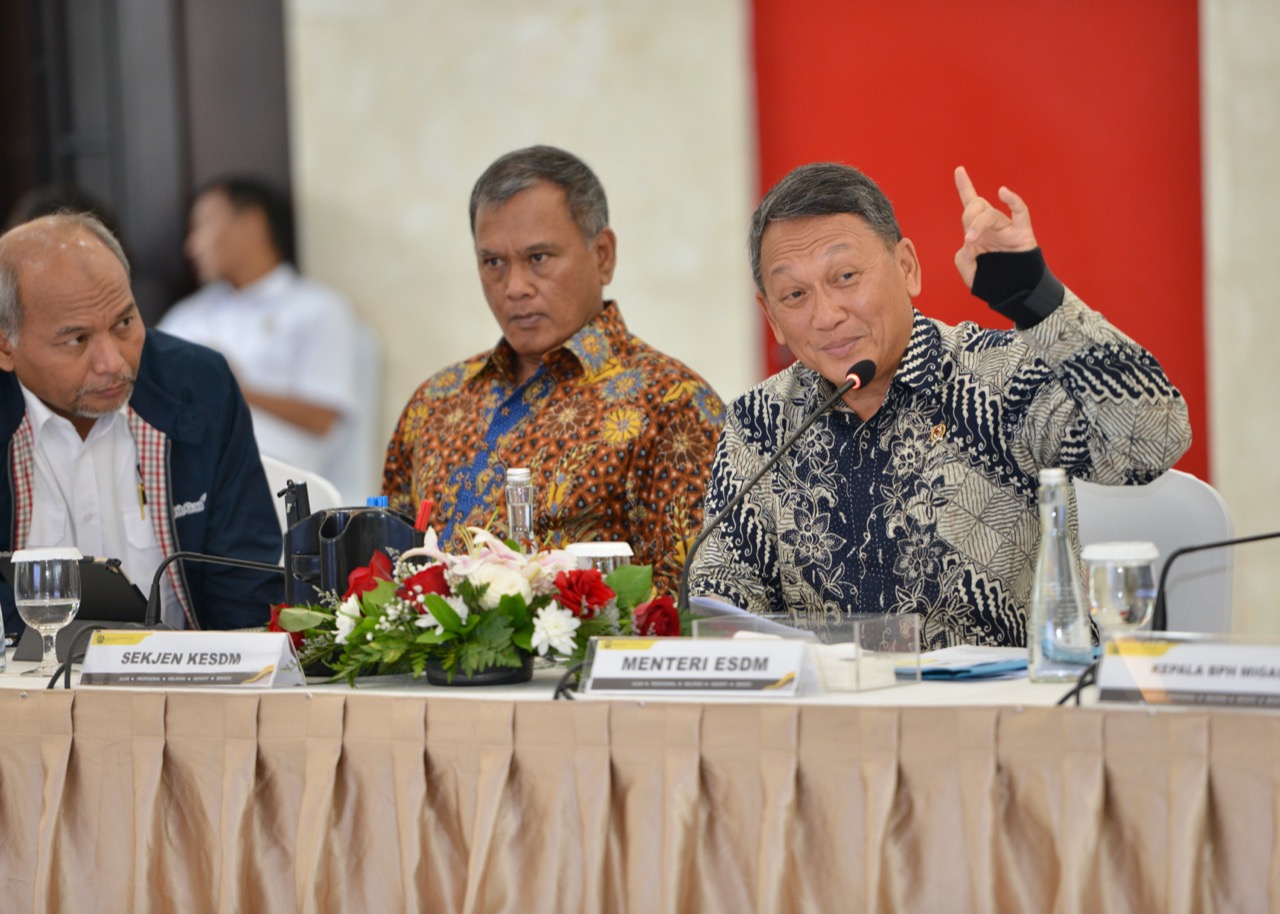 Minister of Energy and Mineral Resources (EMR) Arifin Tasrif and his ranks present the Ministry's achievements in 2019 and plans for 2020 at the press conference held this morning, Thursday (9/1), at the office of Ministry of EMR in Jakarta.

"The EMR sector is the largest contributor of Non-Tax State Revenue (PNBP), consisting of PNBP from Oil and Gas, Mineral and Coal, NRE, as well as other PNBP from Oil and Gas DMO, HR development services, education services, and R&D services organized by public service agencies (BLU) within the Ministry," said Minister Arifin opening the press conference.

Arifin explains the EMR sector contributes Rp172.9 trillion to the PNBP, or 81% of the 214.3 trillion target. The revenue is below target because assumptions about ICP and exchange rate changed. "ICP assumption was USD70 per barrel, realization is only USD62.37 per barrel; similarly, exchange rate was set at Rp15,000 per USD while realization is Rp14,102 per USD. The PNBP target for 2020 is Rp181.7 trillion," said Arifin.

Minister Arifin also reiterates that programs directly connected with the public such as One-Price Fuels and City Gas Networks (Jargas) will be better implemented. The Jargas as gas utilization for domestic needs should be used as much as possible to drive people's lives and economy. The Jargas can reduce household costs by Rp90,000 per month, as well as being more practical and environmentally friendly than oil fuels.

The Ministry also constructed groundwater bore wells at 560 locations to help people get access to clean water. In total, as many as 2,848 bore wells have been constructed. In 2020, the target is 1,000 bore wells.

The Ministry of EMR is revising EMR Ministerial Regulation Number 50 of 2017 on Utilization of Renewable Energy Sources for Electricity Procurement, and preparing draft Presidential Regulation that will support massive utilization of NRE.

In terms of Mandatory Biodiesel, B20 fuel started to be applied in January 2016, and has run well in the PSO sectors. On 1 September 2018, the government expanded mandatory B20 to non-PSO sectors such as electricity, mining, rail transportation, industries, and sea transportation. "Mandatory B20 is leveled up to mandatory B30 in January 2020. The target for biodiesel production in 2019 was 7.37 million KL, and the realization is 8.37 million KL. The domestic utilization is about 75%, equaling 6.26 million KL, so we have saved US$3.35 billion or Rp48.19 trillion of foreign exchange. In 2020, the biodiesel production is targeted at 10 million KL," said Arifin.

For increase in mineral added value, the government promotes both the development of smelter to increase added value and multiplier effect and the monitoring of smelter development as mandated by Government Regulation Number 1 of 2017 and ministerial regulation as its derivative regulation. Until 2019, as many as 17 smelters have been developed, while in 2020 additional 8 smelters will be developed. (IY)

The 2019 achievements and 2020 program is downloadable at the following link: click here