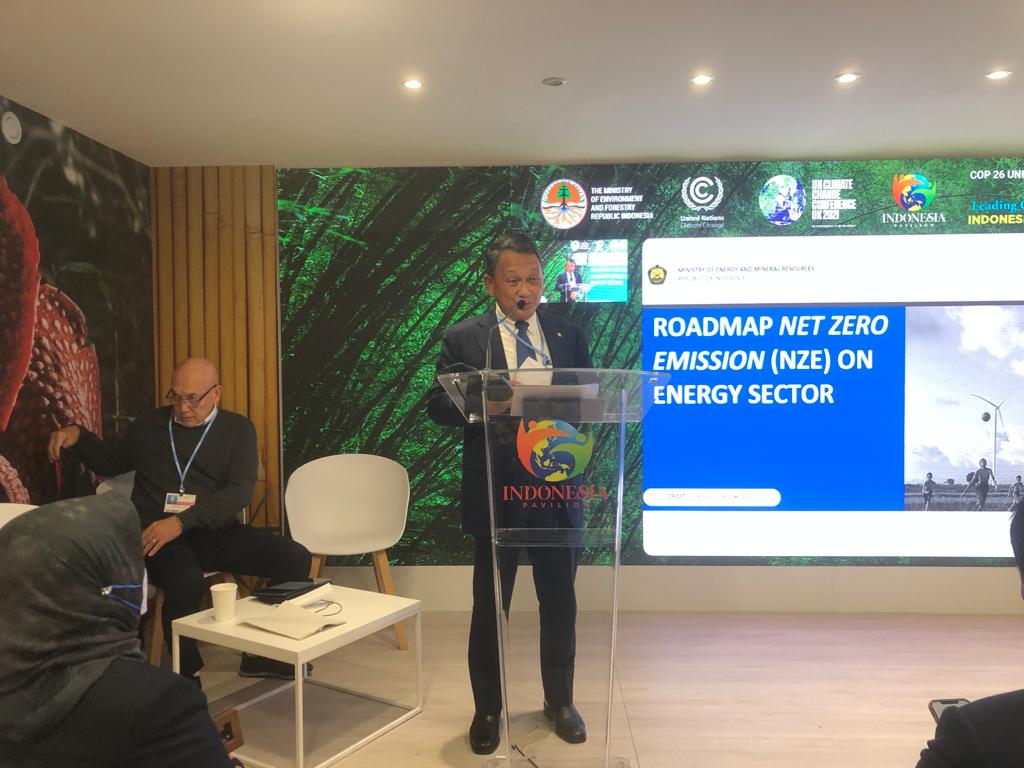 Indonesia's commitment to climate change mitigation is reinforced by the formulation of a number of policies, especially in the energy sector. Indonesia has set the targets for emission reduction and Net Zero Emission by 2060 or sooner.

"The transition to net zero emission requires energy infrastructure, technology, and financing. With improved infrastructure such as grid interconnections, we (Indonesia) will have the opportunity to optimize the utilization of new, renewable energy," said Minister of Energy and Mineral Resources (EMR), Arifin Tasrif, in an event titled "Ministerial Talks: Achieving Ambitious Target on GHG Emission Reduction" organized by the Indonesian Ministry for the Environment and Forestry during the 26th Meeting of Conference of Parties (COP) to the United Nations Framework Convention on Climate Change (UNFCCC) in Glasgow, the United Kingdom, on Monday (1/10).

In terms of energy infrastructure, continued Arifin, Indonesia plans to develop a Super Grid in 2025 aimed to address a mismatch between the locations of new, renewable energy (NRE) sources and the areas where electricity demands are high. "Because Indonesia is an archipelagic state, we need to find ways to provide electricity access for everyone," said Arifin.

Next, the adoption of appropriate technologies is needed to not only maintain and improve the reliability and efficiency of supply but also integrate NRE sources and anticipate the intermittency of NRE sources such as sunlight and wind. "The technologies needed to develop NRE include smart grids, smart meters, and energy storage systems such as pumped storage and Battery Energy Storage System (BESS)," Arifin added.

Speaking on financing, Arifin emphasized the role of the private sector as well as the government and the financial institutions in increasing and accelerating the implementation of low-carbon energy systems. "Improved policies and regulations are needed to create a climate conducive to investment. We try to improve the policies and regulations by simplifying and streamlining the regulatory framework," explained the minister.

A significant improvement was made in the 2021-2030 General Electricity Supply Plan (RUPTL) of the state electricity company PT Perusahaan Listrik Negara, where NRE-based generation is given a bigger portion of 51.6%, equaling 20.9 Giga Watt (GW). "We acknowledge that regulatory framework is essential to the accelerated deployment of NRE and the success of our energy transition," Arifin stated.

Arifin underlined that starting in 2035, capacity addition would only come from NRE sources. "We will maximize geothermal by up to 75% of potential; we will send the power generated by hydropower plants to load centers in small island to balance variable renewable energy power plants," added Arifin.

The Ministry of EMR has secured active cooperation with the Ministry of the Environment and Forestry as well as other state ministries and agencies in meeting the emission reduction target. "Still, we welcome the support from the private sector, at the national and international levels, to help us meet the target sooner," Arifin affirmed.

To fulfil the target set out in the document of Long-Term Strategy for Low Carbon and Climate Resilience (LTS-LCCR), the Ministry of EMR has formulated a roadmap to 2060.

"The roadmap also includes efforts required from the demand side, such as the use of induction stoves, LED lamps, and city gas," explained Arifin.

A regulation on rooftop solar will be issued to give an incentive for people to install rooftop solar systems. Additionally, the government is formulating a carbon cap and tax policy to curb the increase in greenhouse gas emissions and change the economic behaviors. A carbon tax will be imposed on coal-fired power plants as of April 2022.

Between 2026 and 2030, there will be no additional capacity from coal-fired power plants, except from those which have reached financial close or under construction. The government will develop solar PV and electric vehicles massively, setting a target of 2 million four-wheelers and 13 million two-wheelers. Indonesia will be able fulfil its Nationally Determined Contributions (NDC) by reducing the emission in the energy sector by 314 million tonnes of CO2 by 2030.

"We will start the first stage of coal power plant retirement and reduce the utilization of diesel power plants in 2031. Solar, hydro, and geothermal power plants will dominate renewable energy share by 57% by 2035," said Arifin.

In the period 2036-2040, the second stage of coal power plant retirement will be conducted, and the project will cover subcritical, critical, and some supercritical power plants. The share of NRE will lift to 66%, with solar, hydro, and bioenergy power plants dominating the energy mix. Sales of conventional two-wheelers will be limited.

Between 2041 and 2045, the first large-scale ocean current and nuclear power plants will enter Commercial Operation Date (COD). The share of NRE will grow to 93% with solar, hydro, and bioenergy power plants dominating the energy mix. Sales of conventional four-wheelers will be controlled.

Finally, from 2051 to 2060, the last stage of coal power plant retirement will be performed, and hydrogen will be massively developed for electricity generation. The renewable energy share will be dominated by solar, hydro, and wind power plants.

"We are committed to reducing Greenhouse Gas emissions by 29% by 2030 with our own efforts or 41% with international support," Arifin concluded. (IY)