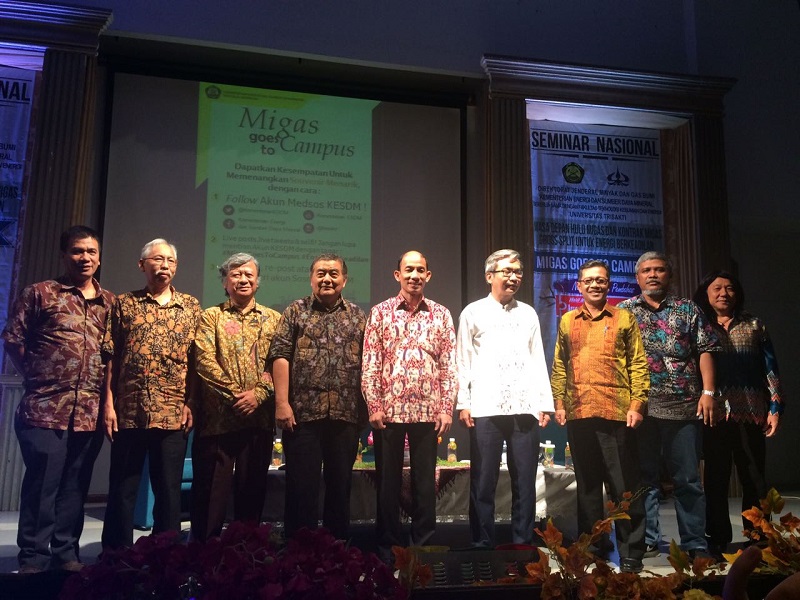 JAKARTA - A Vice Minister of Energy and Mineral Resources (EMR) Arcandra Tahar (17/3) as a speaker in a national seminar of Oil and Gas Goes To Campus at Trisakti University. Attended by more than 200 students and Civitas Academica from petroleum engineering, geological engineering and several other departments, Vice Minister Arcandra explains the condition of the oil and gas industry in Indonesia, background, objectives, gross split to the benefits of the scheme.

"Before we talk about Gross Split, let's look at the data Reserve Replacement Ratio (RRR) as well as data our oil and gas. RRR is the ratio between the number of discoveries of oil and gas with the amount of oil that is produced. Based on the data, the exploration activity is still low. RRR Indonesia with scheme PSC is currently lower than the country of Vietnam and Myanmar. In 2011-2013 exploration activities to find oil and gas reserves is decline. One of them is issued Government Regulation (PP) No. 79 of 2010," said Vice Minister Arcandra beginning of the seminar. Publishing PP 79 in 2010, according Arcandra reduces the incentive acquired oil and gas businesses, so this time the Ministry of EMR is completing the revision of a regulation.

Furthermore Arcandra explained, no state can control the price of oil. But instead of cost or cost in the oil and gas industry can be managed better. Therefore, in the scheme of Gross Split revenue sharing between the State and employers do in the beginning so that employers can set a better cost incurred so that the final result received more.

"With Gross Split, his game is a game technology. With better technology K3S can manage costs," said Vice Minister Arcandra. Not only that, Gross Split scheme more attractive for employers to increase the percentage split to the calculation of the variable component 10 and second component in addition to our progressive base percentage split that has been determined in advance.

After giving an explanation, in contrast with the general discussion, Wamen Arcandra challenged seminar participants' understanding of the material Gross Split which he delivered. "Now my turn, I asked. The young man was given a chance to answer," said Arcandra enthusiastically.

FAQ atmosphere became boisterous. "The first question, how base split in gross split scheme for gas?" said Arcandra. Some students, alumni and faculty who were present tried to answer but not all right. A student who answered correctly appointed as the winner, "52% and 48%, Sir," he replied.

"The second question is yes. Nothing in the presentation. Try courts, where the first to use scheme split gross?" Ask Wamen Arcandra. This time a participant who is an employee in one of the oil and gas sector companies quickly replied, "ONWJ Field, Sir," he said firmly.

"The last question. There was also a presentation. Any benefit schemes gross split?" Further Arcandra enthusiastic. This time a student of geology tried to answer, "for the efficiency," he said doubtfully. Wamen Arcandra then equip the student answers to resume a gross presentation material benefit scheme split. The third participant who successfully answered questions Wamen Arcandra then given gifts and taking pictures together. (NA)